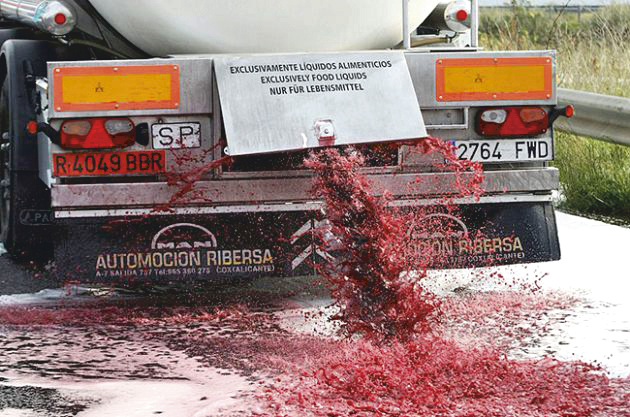 I’m quite sure that the perpetrators of the recent (Jan. 2017), surely criminal, acts of vandalism targeting Spanish bulk wine tankers just over the French border weren’t thinking about any of the wider implications of their noxious activities.
The French Comité d’Action Viticole (CAV, formerly the CRAV) is concerned that not enough is done in their home country to protect their wine industry. Foreign imports, particularly from Spain (France is the biggest buyer of Spanish wine), and also from Italy, are detrimentally impacting their competitiveness. They argue that ‘lower social charges’ and taxes, as well as less red tape in Spain allow Spanish producers to make far cheaper wine and therefore sell it more easily in France. Disillusioned by what they see as French Government procrastination, they have taken the law into their own hands – again!
The first time there was a serious revolt re wine in ‘modern’ France was in Narbonne in 1907 when thousands of protestors took to the streets. Though that was a protest against fraudulent foreign wine, which isn’t the case here (although it has been, earlier in 2016). That protest was particularly nasty, leaving some protestors dead when Police opened fire!