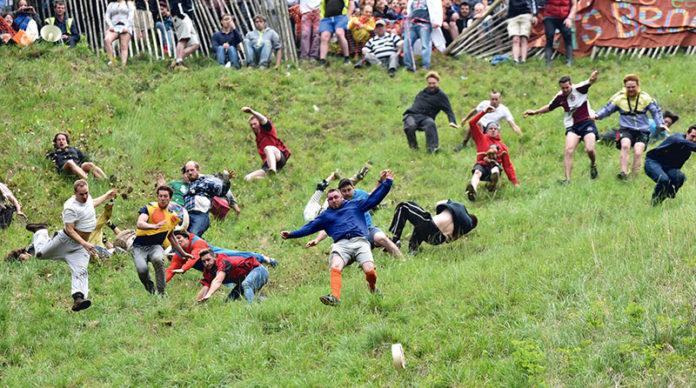 Sporting legends aren’t born, they’re made from guts, sweat, tears, toil and determination. So the Brit Scene salutes Chris Anderson the champion cheese chaser who has just broken the all-time record for the most cheeses won at Gloucestershire’s death-defying cheese rolling race. He has now taken home an impressive and not to be sniffed at total of 22 double Gloucester cheeses in 14 years.
Last Monday he limburgered up for a few minutes before tripping and tumbling into action to follow a speeding ball of cheese. He overcame numerous curdles, such as the flailing limbs of his opponents and the steep gradient of Cooper’s Hill. I imagine a mantra of ‘ricotta get through this’ served him well. Having won so many titles in previous years it was easy to brie-lieve that he would pull off another stunning victory. And he did with a performance that was miles feta than the rest of the pack. He truly is a sporting grate.