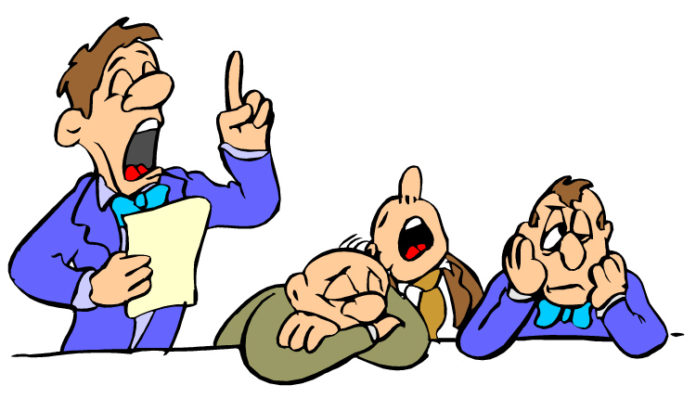 It turns out that stabbing yourself repeatedly in the thigh with a biro for five minutes continues to hurt for several days even if the action doesn’t draw blood.  Mind you, if it hadn’t been for the pen it could’ve been a lot worse.  I could have ground my teeth down to my rib

cage or thrown chairs at a group of people who for the love of all that is holy just wouldn’t shut up.

The writing implement was my pressure release valve during a recent extraordinary general meeting of my urbanization, which was called with only a few days’ notice and seemingly for no urgent reason.  Every matter could’ve waited until the AGM at Easter.

So, when I should have been on a beach applying suntan lotion to the row of bikini-clad beauties of my fervent imagination, I was stuck in a poorly air-conditioned room with about 60 other people for nearly five hours.  You’d think that it being a hot Saturday in August, people would be in a hurry to get out and so would make their points succinctly.  Oh no. Short of getting a 5-year-old child to read out aloud War and Peace in Spanish and English, I don’t think my neighbours could have done anything more to drag out proceedings.  Root canal work without aesthetic would have come as sweet and blessed relief.

I loathe meetings.  They’re tense, negative, unproductive time sucks that accomplish very little, and are full of people who talk because they can, not because they have anything valuable to contribute.  I swear Dante screwed up when he wrote his 14th-century epic poem.  It should’ve been ten circles of hell, with meetings and the emotions they generate right in there as the most tortuous of the lot.

Fortunately, being self-employed I rarely have to attend meetings, but when I was salaried I endured more than my fair share of pointless gatherings with petty-mind people who pursued trivial issues seemingly oblivious to the ill feeling they were causing or the magma pools of anger that were bubbling up.

The worst by far was a meeting of production and admin staff to decide which shade of grey our new office furniture and noticeboards would be.  I didn’t give a flying picket, but attendance was compulsory. The fresh pots of coffee, bagels and chocolate biscuits,

while delicious were scant compensation for listening to people drone on about the mood-enhancing benefits of platinum grey or how cool greys create harmonious environments.

By the time I took my seat at our community meeting I was already in a pretty foul mood, which quickly worsened when someone threw in a conversational grenade that detonated on impact, the room exploding in uproar.  I could see it coming in slow-motion because the person preceded his question with “before we get started…”  We wasted nearly an hour.  Still, it could’ve been worse.

At our first meeting several years back, one of my Spanish neighbours criticised the date of its calling because it was the day before a general election.  This didn’t give him enough time to get back to his main home and vote.  His criticism was followed by more than two hours of debate before we even got to point one on the agenda, actually before we even got to “welcome ladies and gentlemen to our first AGM”.

At the most recent meeting, the main order of the day was to vote on whether or not to continue using a company that provides us with a vital service.  As we had already voted on this at Easter, this was a monumental waste of time.

Now when it comes to things like companies that clean your pools, look after your gardens or tidy up your complex, you already have an opinion about them before you attend a meeting.  Nothing that anybody says is going to sway you.  All discussion is redundant.  Not in my community, because several people spent 90 minutes going round in circles, saying nothing of merit.  If I had bigger cojones I would’ve stood up and told everyone to button it. As it was, I meekly asked if we could move to a vote.  This was ignored.

Some of my neighbours, so nice and warm in person turn into monsters when in meetings. Others appear to have a form of Tourette’s where they just blurt out random stuff, cutting across whoever is speaking.

As I looked around the room, it dawned on me the human race is doomed.  If a group of neighbours get so angry so quickly about trifling issues such as whether towels can be hung on balconies, you realise humanity hasn’t got a hope in hell.