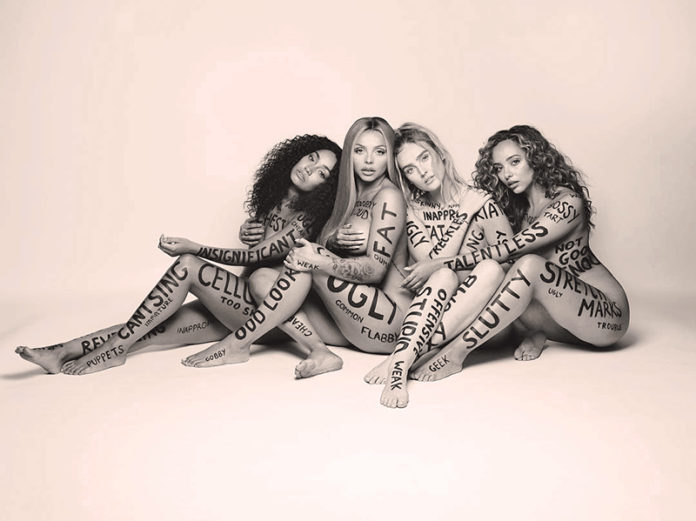 I don’t always agree with Piers Morgan but in his spat with the pop group Little Mix, he was spot on for criticising a nude image of the girls which was intended to champion body positivity. If you haven’t seen the photo, it is of the four pop princesses sitting next to eachother without a stitch on, their skin covered in labels such as “fat, ugly and flabby”. The cause the girls are supporting is, of course, a noble and worthwhile one. Too many people lead miserable lives because they don’t accept the way they look and what nature has given them which knocks their self-confidence and self-esteem.
Yet Little Mix undermined their efforts by having the photo airbrushed within an inch of its life, like many of their other official snaps. If you’re trying to get the message across to your young and impressionable fans that they should accept their bodies warts and all then using technology to improve how you look in front of the camera is not the way to go about it. That’s disingenuous and a disservice because it gives them unrealistic images to aspire to.
Consequently, when they notice their own ‘imperfections’ that are common to everyone they’ll make comparisons with the perfect images they see in the media and start thinking something is wrong with them. They may even try to ‘correct’ their perceived faults by resorting to plastic surgery which teenagers and young women are doing in increasing numbers. Also, if the Little Mix ladies were comfortable in their own skin they wouldn’t turn to computer trickery after every photo session. How refreshing and what a powerful message they could send if they never touched up their images.
What we are left with is four attractive women using their naked bodies to sell records. It’s a formula that’s as old as the hills and I don’t see anything wrong with it. But don’t dress it up as a cause and say you’re doing it to help fans or fight for the sisters. That’s just hypocrisy.