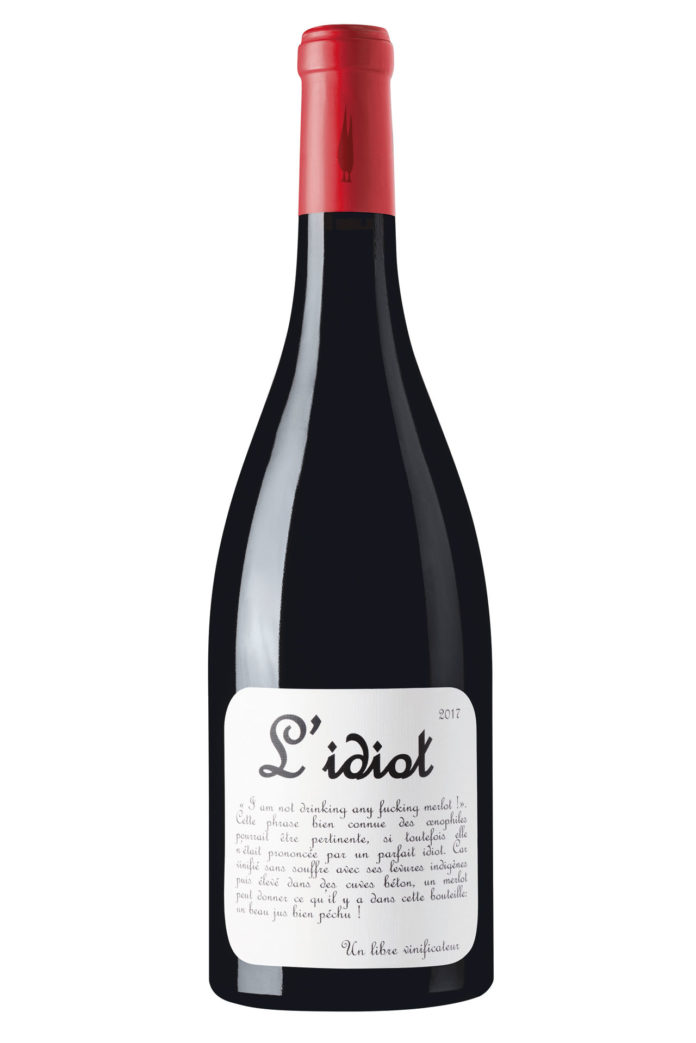 Well, after 23 years writing mostly about Spanish wine, I have to admit that it was a total, though most welcome surprise to be acknowledged by the French, by having a wine named after me! Merci beaucoup, mes amis!
L’idiot, is a red wine from near Narbonne, South West France, made with Merlot, despite the comment of one of the main protagonists of the film, Sideways (referred to on the labels with appropriately placed asterisks!). In fact, the name of the wine actually refers to the character who makes the, less than pleasant, comment, about Merlot, one of the great grape varieties of France, and not about me at all! Not sure if this is a let down or a comfort!
There’s a hint of rebellion about the naming of the wine, as well as its making too. Maison Ventenac (http://maisonventenac.fr/en) goes further though, the whole range of several of their wines are known collectively as Les Dissidents, and this makes them all the more attractive for me! The gloves are off, along with the blinkers – these wines don’t conform to the norms of the area, or to those of much of France in general. Most of us love a rascal. I know that when I was teaching I usually got on best with the likeable rogues. I’d like to meet this rebellious team one day, Stéphanie and Olivier Ramé – in the meantime, I’ll just enjoy their wines!
This really tasty, almost succulent wine is fermented in concrete tanks, using natural wild yeasts growing in the vineyard without the addition of sulphites. The cap that forms at the top of the tank, made from the Merlot skins is punched down in the first few days and the juice/wine underneath is pumped over the skins to ensure good extraction of colour, tannins and flavour in the finished product.
After fermentation there is a further maceration with the skins for ten days, followed by malolactic fermentation and three months ageing in concrete. When ready, the wine is then bottled with a light filtration.
A juicy, fruity wine with a little eucalyptus on the nose joining the blackberry and light plum fruit. Its slight ageing gives it some presence on the palate – if drinking this wine without any knowledge of it, it would pause conversation a moment or two as you reflect on it, wondering what it is and where from, rather like a song or a piece of music can stop you in your tracks.
When tasting three of Le Dissident range, I actually started with their Chardonnay, Carole. Again, I liked the seemingly self-critical, risqué opener on the label – ‘Another Chardonnay! Yes, but this one is different.’ I liked the wine as well, for exactly that reason.
The vineyards aren’t far from the Mediterranean and there’s a faint, and pleasant salinity to this fresh, citrus fruit wine, which also has a slight reference to some more exotic fruit, though understated, with a little minerality too. I really liked it – way different from the wonderful Burgundy whites, made of course, with the same variety.
And again, on the label, these likeable rogues have pointed out that some have asked why add some Gros Manseng grapes to the Chardonnay – their answer, simply – ‘Why not?’
Both varieties were harvested at night and then fermented in large, 300 hectolitres, stainless steel tanks, using carbonic maceration for a super-fruit finish. Good wine!
Finally, Le Paria 2019 is made with Grenache, in years gone by the workhorse of both French and Spanish vineyards but these days, being elevated to far higher things, simply by having some respect for a much abused variety. It’s a little lighter in colour, but don’t let that make you think it’s an inconsequential wine – it’s not!
And it’s certainly not the social outcast that the name suggests – this is no pariah, it deserves a place in your cellar for sure! It’s made in a similar way to L’idiot above and comes out as a lovely dark red fruit flavoured wine with presence too.
Really good winemaking at Maison Ventenac, resulting in super wines! I’m definitely in the market to taste their other offerings too!