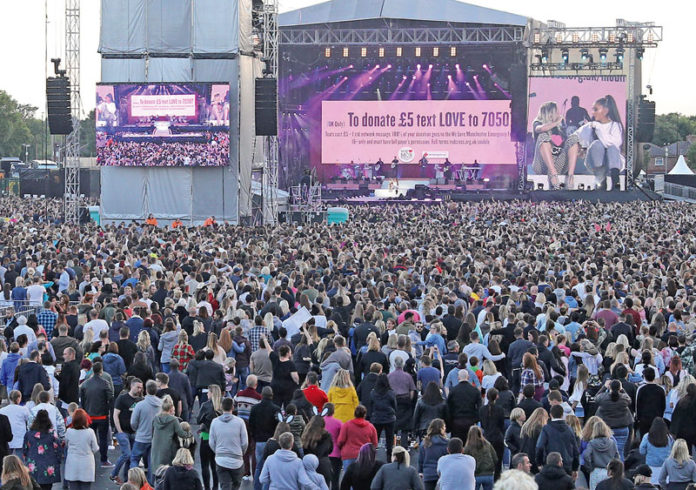 When Ellen DeGeneres hosted the Emmy Awards shortly after the 9/11 attacks in New York her opening speech included the line: “what would bug the Taliban more than seeing a gay woman in a suit surrounded by Jews?” It was a magnificent up yours to the terrorists. Likewise, Sunday’s Manchester ‘One Love’ concert was a brilliant two-fingered salute to the brain dead jihadis who seek to end our way of life. It was everything these pathetic excuses of people hate, not least as Sophie Ridge from Sky News pointed out when talking about some of the performers – “young, liberated, successful women wearing whatsoever they damn well want”.
There were so many joyous and emotional moments from the concert, including the police officer dancing with young fans, the crowd singing to just about every song, Katy Perry’s powerful and defiant performance and Ariana Grande and the Black Eyed Peas singing ‘Where is the Love?’ That was one of the moments where I cracked.
Equally wonderful in the aftermath of Saturday’s atrocity was stoical British humour. People had a field day on social media mocking ISIS and those foreign newspaper commentators who said our nation was ‘reeling’. Then there was the man fleeing the London attack while being careful not to spill his pint. British defiance and humour at its best.
What’s not funny though are the questions Theresa May has to answer. As Home Secretary for six years she caved into Treasury pressure and presided over a swathe of police cuts that has resulted in nearly 20,000 fewer officers. And while that is a terrible track record, worse was what she said to Police Federation members in 2015 who warned her of the effects of funding shortfalls. On hearing that cuts in community policing could increase the risk of terrorism because intelligence could dry up, she told them to stop “scaremongering” and “crying wolf”. And the Tories reckon they’re the party of security. Geesh!
Whether police cuts have made us less safe is hugely debatable, but I can’t imagine them helping matters. If she does win the election perhaps she’ll start listening more carefully to the police and think less about saving her political skin.