A DUTCHMAN described as the right-hand man of jailed British drug kingpin Robert Dawes has been arrested in Torremolinos. Emiel B., 42, was detained in a joint operation between the Guardia Civil and Dutch police and has already been extradited to the Netherlands, said Guardia officials last week.

Robert Dawes, 44, accused of running one of Europe’s largest drug-trafficking networks, was arrested at his Benalmádena villa in November of last year and is currently being held in France, where he faces charges over a shipment of 1.3 tonnes of cocaine that was flown into the country from South America in 2013. The police operation that led to his arrest sparked the investigation into Emiel B., who officials say regularly travelled to the Costa del Sol to receive instructions from Dawes regarding drug shipments to European ports such as Antwerp and Rotterdam. 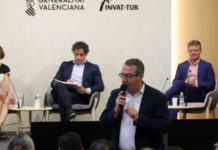