Further to the letter from Bill Gerard, I posted a similar theory on Costa Blanca Forum some weeks ago. The question is: how do you send a virus to the West without killing millions of your own people? The answer is simple: you create a mild virus, call it SARS, but make the world believe that it is very serious and then vaccinate your population against it but include an antibody against your lethal virus.
Note that SARS was only active in mainland China and Hong Kong. Amazing that the Chinese were able to contain such a serious virus within their territory.
The Chinese then spent the few years vaccinating the whole population against SARS which gave them the opportunity to include an antibody against future viruses such as corona. Easy isn’t it?
Why has New York the highest level of corona cases? Because it is the icon of the Western Imperialists and could be brought to its knees by a few Chinese tourists with corona virus aerosols visiting the tourist hot spots – easy isn’t it?
I think that the age of biological warfare is upon us and the Chinese are the first (?) to exploit it.
G R Nicholson 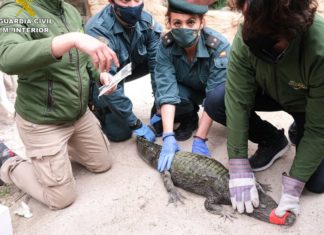 March 4, 2021
0
A caiman measuring 1.6 metres in length has been seized by Alicante Guardia Civil. The sharp-toothed predator which hails from Latin America was being kept...