FOLLOWING three years of bureaucratic red tape, Málaga town hall has finally got the green light from the Junta de Andalucía to move forward on the conversion of the city’s old Campamento Benítez military base into a large public park.

The Junta’s approval of the development plan that will allow the creation of the park on the 28-hectare site – which was originally approved by Málaga town hall in February 2014 – was published in the regional government’s official bulletin (BOJA) at the beginning of this month. 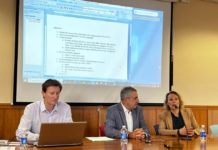