A BRITISH man had to be pulled out of the water channel near Las Ramblas urbanisation in Orihuela Costa by local police.

A force spokesman told Costa Blanca News that the man was drunk – and after having a heated argument with his wife, he decided to jump into the water channel for unknown reasons. 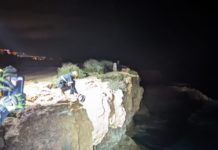