Dear Editor,
I have been a reader of the CBNews for 20+ years, but have only read ‘The British Scene by Tom Draper’ for the first time in today’s edition, 15 July, and I shall never read it again.
I have always considered the CBNews to be a ‘proper’ newspaper, where trained journalists write factual pieces and any contributions by political commentators provide the reader a considered and balanced viewpoint.
Unfortunately, the piece by Tom Draper is shocking in the hate and vitriol it contains aimed at people with whom he has a difference of opinion. And the one section where he dispenses with his hate and vitriol, he replaces it by ridiculing a young mother whose simple mistake does not deserve the awful, nasty comments he has made.
What a sad man he must be, and for that I feel very sorry for him, but I do not want to read a column written by someone who is obviously so full of hate for other people, and I am disappointed that the CBNews thinks that the vast majority of the people who buy your newspaper wants to read his extreme views. How on earth does such a hate-filled and vitriolic piece be accepted for publication – some of the comments are in the same category as so-called internet trolls.

Dear Ann,
Thank you for your email. I fear you have misread and/or misinterpreted my words. There was neither hate nor vitriol:
1) I was expressing the not uncommon belief that Blair (whose mistakes have cost countless lives) should be tried as a war criminal. Please, don’t shoot the messenger.
2) I highlighted one of Andrea Leadsom’s discriminatory and abhorrent views on gay marriage, which is based on her study of the Bible.
3) Absolutely, I was ridiculing the mother. Note that I started this piece by saying that we are all guilty of making dumb mistakes.
4) In general, columnists are paid to be opinionated. In the UK dailies, from tabloids up to proper newspapers, columns are slanted toward the political leanings of their authors.
Kind regards,
Tom 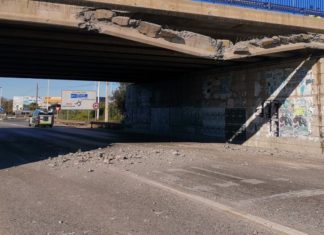 December 7, 2021
0
Work is underway to repair the bridge on the N-332 in Torrevieja which was damaged when a truck transporting a vehicle with a crane...