Don’t airbrush history by destroying, damaging or removing statues. Let’s use this giant wave of public anger as a golden opportunity for good.

There is good and bad in everyone – the only difference is that in some people the balance is for good, in others the balance goes the other way. That was seen even in Jesus…but more of that later.

All the statues around Britain and worldwide have been erected to commemorate the good side of the person, while ignoring anything bad the person did.

So, instead of disposing of our statues, or putting them in museums, why not put them back on their plinths and on one side of the plinth remember all the good things that person did, and on the other record the bad things.

That way future generations who pass the public statues could read the good the commemorated person did while balancing that with the bad side. Ghastly as it is for us to think about it now, you and me and all people in Britain have, in some way, benefited from the slave trade. Without it Britain would not be one of the top ten wealthiest nations in the world and we wouldn’t have had the millions from super rich slave traders and land-owners for public buildings and to institutions. So it is fitting to say we owe a great debt of gratitude for the blacks who suffered great hardship, cruelty and death in the hands of traders and landowners of the 17th and 18th centuries.

If you haven’t watched some of the heart-wrenching films showing what slaves went through then you should – and if it doesn’t bring you to tears nothing would.

I think Germany was wrong in removing all the statues of Hitler at the end of WW2. He and his ghastly band of Nazis should be on statues with details of their atrocities recorded below, especially to the Jews and races the Nazis believed inferior. That way history would not be airbrushed or forgotten and would be a poignant reminder for future generations to be very wary of who you elect into power!

I mentioned Jesus earlier. He committed an act of vandalism when he ran amok in a temple when he saw money lending going on…with the church no doubt benefiting financially from the transactions. His motives may be right but his actions were wrong – in just the same way as the vandals who commit crimes in pursuit of a cause.

As a human race we are better than all this. We cannot erase history, we have to learn from it and teach the next generation to do better than we have. That way we can all lead better lives. 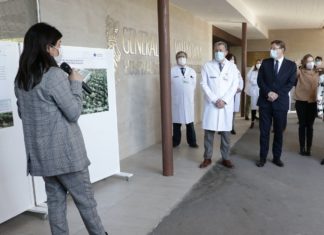 February 26, 2021
0
Work has started at Elche general hospital to extend and reform the surgery block. Regional president Ximo Puig visited on Tuesday and said the Valencia...