At a decisive moment when the developer is determined to get the final green light to build 1,500 new houses on this last kilometre of virgin coastline, the European Parliament Petitions Committee has intervened to safeguard the interests of environment protection.
The previous intervention of the European Parliament in 2012, after C.L.A.R.O. presented its petition supported by over 7,000 signatories, effectively paralysed the developer’s building plans by insisting on an Environment Impact Study. However, the Developer can lawfully carry out this study, and when it was presented in 2014, it was seriously deficient. Despite repeated objections, at the end of 2016, the developer presented a final revised project which contained no significant changes. It maintained the objective of building 1,500 new houses and continued to locate the two endangered species found on Cala Mosca in public spaces where they would be exposed to obvious and no doubt definitive destruction.
At its meeting on 28 February, the Petitions Committee of the European Parliament intervened again to help save this emblematic last green, open area from being concreted over. Bob Houliston, who presented the original C.L.A.RO. petition and Marta Guillen, councillor of the Orihuela Cambiemos party argued for support to counter the formidable power of the developer who has a huge advantage in the approval process; to ensure protection of the special environment of Cala Mosca; and to prevent those already living here having to pay the price of a deterioration in public services which would result from the mega building project and perhaps a 20% increase in the population of Orihuela Costa.
The Petitions Committee unanimously decided that the Cala Mosca issue was sufficiently important to be kept on its agenda. The President of the Committee said she would write to the Valencia regional government, which is responsible for the final decision on the building project, to insist that the proposal be subject to the most rigorous examination before any decision is made. Finally, the Committee President said she would request the European Commission, responsible for the application of environmental law, to carry out its own investigation of the Environment Impact Study.
The decisions of the European Parliament Petitions Committee are very important. They ensure that no quick approval will be given to the building project which, before the meeting in Brussels, seemed imminent. The decisions ensure that the regional government of Valencia is aware of the political importance of the future of Cala Mosca and that the European Union will be watching over their shoulders to ensure that a rigorous examination of the building proposal be carried out before any decision is made. Implicitly, the decisions imply that before any final decision, the Petitions Committee should consider the issue again at a further meeting.
We have gained valuable support and time to ensure that the struggle to save Cala Mosca continues. There will be an opportunity at the demonstration on March 5 for the people living here to express their strong solidarity with the campaign to ensure that this last emblematic green, open space on Orihuela Costa is not subject to the fate of being concreted over like the rest of the coast. 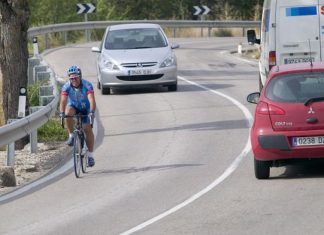 January 28, 2021
0
New traffic laws are being drafted in order to better protect vulnerable road users such as pedestrians, cyclists and motorcyclists. Full report in tomorrow’s Costa...