In reply to Brian from Valencia’s letter about the EU and all things left. I don’t want this tat for tat to drag on indefinitely so I will make this as short as possible.

He quotes Mikhail Gorbachev as saying that European leaders are trying to ‘recreate the Soviet Union in Western Europe’ via the EU.

That statement in itself is of course laughable. I sit here in my Spanish home having taken advantage of Freedom of Movement which exists between EU nations. I have maintained the right to remain in Spain under the Withdrawal Agreement, but have had that all-important right to roam to other EU countries – and live and work with under the same conditions as a national of that country – taken away because of Brexit. So, Britain now being outside the EU has actually limited my freedom, not suddenly empowered me with new anti-Commie powers to do as I please.

Also, just two years ago Mr Gorbachev outlined his vision of a ‘unified European community for the 21st century’, based on political reality and a doctrine of restraint and targeted on the creation of a ‘vast economic space from the Atlantic to the Urals’. He did that in an address to the Council of Europe, which would seem a bit strange for a man who thinks the EU is trying to recreate the USSR.

His vision for the future was based on a bid to end divisions in Europe between the East and West. There was no suggestion from him that the EU would have to be disbanded in order to achieve that, far from it.

The unrest and wars in the last 40 years in Eastern Europe are a precious example of the most important thing that the EU has brought to its Member States. And that is peace. All these nations which have traditionally fought each other over many centuries leaving hundreds of millions dead now only do their arguing over a table, with confrontations being verbal rather than with tanks and machine guns.

We don’t take up arms against each other anymore because we resolve our problems within the Union – its Parliament and summits, etc. Who would have thought that nations such as France and Germany could actually go for 70 years without a war – and even become close allies – with their history of animosity?

But there we have it. We have had more than 70 years of peace, largely due to the EU and the fact the nations now work together in all aspects and are interdependent, meaning that wars would be very counterproductive.

No one in their right mind would suggest that the EU is perfect, but it is bringing us peace and prosperity, the likes of which Winston Churchill dreamed of when he said in 1946: “We must build a kind of United States of Europe. The structure of the United States of Europe, if well and truly built, will be such as to make the material strength of a single state less important.”
And that – of sorts – is what we have now, Brian.

More on the TIE saga 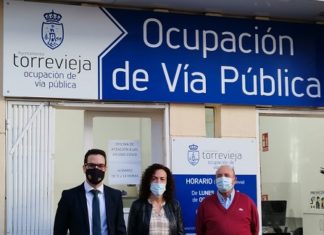 May 6, 2021
0
Bar and restaurant terraces will be able to cover extended areas of the public street again this summer in Torrevieja. The town hall announced the...