Dear Editor,
I read the open letter from Simon Manley with interest. I was especially grateful for the referral to the joint technical note, which answered a question Mr Manley does not address in his letter; the issue of voting rights.
Though disappointed to see that the matter is still a bone of contention, I was pleased to read that the UK wants to protect the existing rights of UK and EU citizens to vote and stand in local elections in their host state.
Given their expressed desire to preserve intact all the accumulated rights of EU and British citizens, the EU position in this regard strikes me as somewhat schizophrenic. Because they arise from EU citizenship, the EU position at present ‘does not cover’ the rights to vote and stand in local elections.
Should there be no agreement; the issue could be resolved in bilateral discussions between the UK and individual EU nations following ‘Brexit’. This should not be a problem with Spain, which readily grants municipal voting rights on the principle of reciprocity, the prime example being the current treaty with Norway.
However, Norway is an EU country in all but name; it absorbs EU legislation into its own law, it pays for access to the single market and accepts the four freedoms of movement of capital, people, goods and service provision. This is probably not going to be the case with Britain.
In his article in The European Journal of Legal Studies (Volume 4, 2011), Loïc Azoulai discusses what he calls the ‘formula on retained powers’, expressed thusly;
‘Whilst it is not in dispute that EU law does not detract from the powers of the Member States [recognized in particular in the areas of direct taxation, social protection, education, attribution of nationality, civil status of persons], the fact remains that, when exercising those powers, the Member States must comply with EU law.’
Essentially, this means that EU law can be extended and applied beyond the subject areas over which the EU has been given jurisdiction by Member States. Title I of Part I of the consolidated Treaty on the Functioning of the European Union confirms that there are very few ‘retained powers’ where the EU does not claim some sort of influence or role.
Moreover, the four freedoms of movement are enshrined in EU primary law and as such have, as Azoulai states, ‘a practically unlimited field of application’. Indeed, he argues that the direction of travel of EU law means that Lenaerts’ view on Federalism (American Journal of Comparative Law, 1990), that ‘there simply is no nucleus of sovereignty that the Member States can invoke, as such, against the Community’, applies to the EU now.
Technically, therefore, the EU could veto any bilateral agreements regarding health, education, pensions, residency, voting rights and so on, between Member States and a UK that does not accept any one of the four freedoms.
This may be a remote possibility at the moment, but nothing in the ‘Brexit’ negotiations to date gives much ground for optimism. Life cannot be easy for our civil servants and diplomats at present, given that the British Government is at odds over the policy to be adopted in negotiations, and does not appear to have even discussed strategy and tactics!
British citizens living in Europe need to stand up and be counted, and demand that there be no diminution of our rights. To do this, we need to demonstrate strength in numbers. Consider joining a group affiliated to the British in Europe Coalition (britishineurope.org). To preserve our rights, it requires many more than the 35,000 currently represented to raise their voices.
Here in Spain, if you have not registered your residence (the green form), do so. If you are not already, go down to the Town Hall and ask to be placed on the Padrón. If you think you are on the Padrón, check – it needs to be renewed every five years.
(Incidentally, it is a myth that being on the Padrón opens you up to increased taxes. The opposite is true in that inheritance tax is reduced. The list is closely guarded with severe penalties for misuse. Not even your local Mayor has access.)
Then, register to vote. A change in the law means that EU citizens must express their desire and intention to vote. You are not automatically on the electoral roll if you are on the Padrón. If you are refused for any reason, you are being denied your right. Ask for a complaint form and take two photocopies, one for yourself and the other for the British Consulate.
Finally, if we still can vote in the local elections due in 2019, please vote! 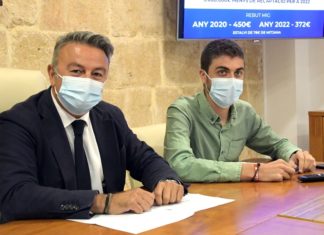