I have just read a very one-sided point of view by your correspondent Dave Jones.
His views are very one sided and although I considered the way to vote at the time, I was not sure from the evidence supplied who was right. I had to give a long and thoughtful look at all the options. Both sides seemed to be wrong and the figures being stated were beyond my imagination.
As it has turned out many people were of the same opinion, not knowing how to vote. One problem which did focus our minds was that we were not in control of our own destiny. Mrs May tried to have a Muslim preacher sent to America but was unable to carry this out as resistance was given by the Court of Human Rights. Why should they stop the export of a criminal? How would that stop his human rights if he was proved guilty and sent to an American prison. That did happen and in the end he was jailed for many years.
This showed that we are now unable to control not only our borders, but also our judicial system, which is dominated by Brussels. What a terrible state of affairs. Another point to consider as far as votes are concerned is the Eurovision Song Contest. We would never win that anymore as all the eastern bloc vote together and we do not stand a chance. Terry Wogan was right!
Now think about all the new countries in the EU. Where do they come from and would anyone ever listen to us again? Answer -NO!
It appears that Mr Jones does not want to be in control of his own destiny but be ruled by the EU. He is also a Guardian reader, which limits him in his ability to think for himself as everyone knows that they are totally against – dare I say it – Brexit. Figures can be banded about and no one is able to dispute them.
The sum of 500m a week has been stated. Cannot quite see that as we have almost full employment and a shortage of skilled labour for many industries and we are restricted in allowing skilled people into the country as we are controlled by the EU! Is that good? I do not think so. Perhaps the writer was not born, or cannot remember before we entered the original organisation – the Common Market. Great idea – free trade between countries – and that is how it should have stayed. The people at the ‘top’ now want a united Police Force and Army. Where will it end? It all costs money.
Can the writer tell me the last time the books of the EU were audited? I bet he cannot, as no one will take on the responsibility. You can guess why – corruption, otherwise all the top account firms would love to earn millions from an audit. They are ALL frightened by what they might discover – there can be no other explanation. Guess why!
Please do not forget that all the countries export goods to us. It all seems that people do not want to mention that fact. I think we are the second largest country that imports agricultural goods into the country from Spain.
What happens to the thousands of vehicles and goods that could be held up in the docks if we impose regulations against them? They will go bankrupt if their goods, which are mostly perishable, cannot be delivered on time. Machinery and cars from Germany could be affected if the ‘just in time’ method of manufacturing is not allowed. Companies will collapse.
No one wants unemployment so do consider the other side of the argument – they NEED us as much as we need THEM!
There is also a big world outside the EU where we have been restricted from trading, as the EU laws do not allow that. I think there is almost 90% more of the world away from the EU which could increase our market not restrict it.
Wake up Mr Jones and do not preach doom and gloom all the time but think of the positives and opportunities that the rest of the world could offer. It will be a very exciting time for the UK away from the restrictions of the EU. One thing I forgot – only 36 billion – I think that’s the sum we pay in! This will be considerably reduced, so there should be some money to repair the UK roads that are fast becoming the worst in the western world!

Hi Geoffrey, thanks for taking the time to write in and share your point of view. My piece was one sided because it was exactly that – my point of view on our Vox Pop opinion page.
I have to admit that I am a believer in European unity and the concept of freedom of movement which has allowed me to do the things I have done since the age of 18 – studying and working in other European countries, enjoying the same rights as the nationals in those countries, safe in the knowledge that I will get a state pension when I retire and I am covered by their social security systems. Being a bit of a ‘troubadour’, with the full backing of the state is quite a wonderful thing, Geoffrey. Losing that freedom will be a huge backwards step for the youth of Britain (in my opinion).
You have mentioned the beautiful future which stretches out ahead for the UK, if Britain leaves the EU at the end of March. However, most independent opinion does not see it that way. The International Monetary Fund (IMF) has warned that ‘all likely Brexit outcomes will entail a financial hit for the UK economy’.
Another quote: “The International Monetary Fund has downgraded its outlook for UK growth for 2019, the year of Brexit, while much of the rest of the G7 have been upgraded on the back of a strengthening global economy.”
British business leaders and farmers are not at all keen on Brexit, Geoffrey. They see their workforce disappearing – the people who do the jobs the Brits don’t want to do – the fruit pickers, the waiters, the farmhands, etc, etc. But also skilled workers, such as the nurses for the NHS, who will no longer go to Britain. Worse still they see British business opportunities disappearing with them.
“The UK’s motor industry faces extinction if the UK leaves the EU customs union after Brexit, CBI president Paul Drechsler has warned.” (The Independent in June).
More from the CBI president on the BBC in June: “Sections of UK industry face extinction unless the UK stays in the EU customs union, the CBI president has said.
“He said car firm bosses had come to him saying the industry would suffer unless we get real frictionless trade.
“Paul Drechsler also said there was ‘zero evidence’ that trade deals outside the EU would provide any economic benefit to Britain.”
In short, the Brexit boost for Britain does not exist, in the eyes of independent economists and business leaders. They think Britain’s future would be much rosier inside the EU. Outside the EU they believe that British business and companies will suffer.
No one could pretend that the European Union is perfect, or that is not in need of reform, just as many facets of British society are archaic, anachronistic and in need of reform. However, in my opinion, the way to do that is from the inside – as a member of the European Union – and not to run away and throw up the drawbridges on a not-very-large island which desperately needs to maintain its very close trading and social ties with its neighbours. 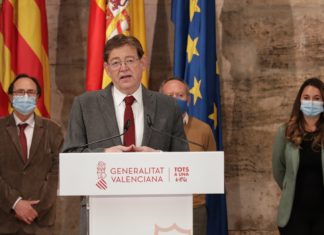 January 20, 2021
0
Funding to reactivate the sectors most affected by Covid-19 has been increased to €340 million by the regional government. Dubbed the Plan Resiste, the aid...