I read that La Nucía council has declared this year’s Oktoberfest at the sport centre ‘a success’ – that’s probably because none of them actually went there.
Last year we thoroughly enjoyed the Oktoberfest beer festival in La Nucía with a group of friends. The whole area was themed with haystacks, a variety of food trucks with different specialties (even fish and chips) and the marquee itself with enough room for tables and benches plus a dancing area and that was decorated accordingly. We had a great time and enjoyed a wide variety of beers and other drinks being served.
We expected the same last weekend and we eagerly called our friends to repeat the experience …but what a disappointment it was!
The variety of beer was reduced to four (all Paulaner, last year I remember enjoying a pint of Guinness among at least 10 others of several breweries) the prices were even more exorbitant than in the UK (€4.5 for a pint and €9 for a litre), there were no food trucks at all so your only option to soak your beer in some food was a lousy eight-plate menu with advertised ‘traditional Bavarian dishes’ reduced to a pretzel, hamburger and chips, sausage (certainly not German) and chips, chips on their own, or a seriously overpriced knuckle.You had to get tickets for the beer, served at the bar, but you had to sit at a table and wait for a ‘waiter’ to come to order your food. It took ages before one showed up, we paid up front, and we were actually served 40 minutes later – totally unacceptable.
The advertised ‘Bavarian’ music was ‘The Bird Song’ plus a pseudo-rock band that did its best with a lousy music equipment but failed to deliver and then recorded music so loud you had to shout to the person sitting in front of you at the table. The advertised ‘Bavarian’ atmosphere in the marque was limited to a few pieced of cloth hanging from the ceiling , advertising boards for local companies on the walls and a line of bars units that had probably just been used at some of local fiestas – to be honest it was like a factory taken over by squatters.
So totally gutted, we ended up getting it a car and going to a proper pub for some decent beer and food – and an atmosphere not resembling an abandoned industrial unit.
Get your act straight La Nucía, if you’re going to advertise an ‘Oktoberfest’ put some effort into in. Last year was great, this year a disgrace. 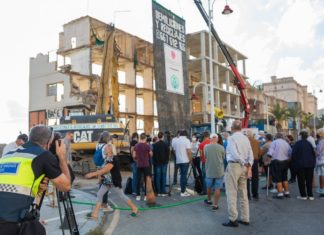 October 20, 2021
0
The long-awaited demolition of the derelict hotel in Arenales del Sol, Elche, finally got underway on Tuesday, an eyesore that has blighted the seafront...