(Orpea is the OAP residential home where a British man allegedly killed his wife three weeks ago)
I have read and listened to many comments since Sunday. The fact that an old man took the life of his wife, both residents at the centre, has unleashed tongues and pens alike.
My mother has lived at the Orpea home (Bernat Mege, 3 -El Campello, for the past six years. The home is about eight kilometres away from my house and my brothers’ houses. Within 500 metres we have another home, but we had our reasons not to make use of its facilities.
Each day that passes we are more convinced that we made the right decision. We know that it is not easily accessible, but not even with various visits to the council by relatives of residents, expressing their concerns, have we managed to get Campello town hall to improve the exterior of the building. This is not the responsibility of the centre, it’s entirely the council’s responsibility, and they are ignoring this fact.
The inside of the home is undergoing constant improvements aimed at the comfort of the residents and this is encouraging for the relatives and visitors.
Today (23-2, page 38) in Diario Informacíon newspaper, I read a headline where it is called an “asylum” … it is not an asylum, the name and its purpose have the same connotations, it would be correct to call it a home for the elderly and not so elderly, both able and assisted.
During all this time we have visited our mother daily, we did not “park” her there, we thought that we took her to the best place we could find with the care she needed to receive, as quickly as possible.
As I said many things are read and written by people who do not have a total knowledge of, at least, this centre.
What went through the old man’s head? A moment of madness? Did he understand the reality of the situation they were in due to their illnesses? The distance from their family? Nothing out of the ordinary happened the day before, they were seated in the place that they always sat and with smiles on their faces, what sad event could push him to do what he did. If there is something to be said in favour of the ‘ supposed attacker’, he committed the act in the privacy of their room, so no other residents of the home could see or guess what happened.
I want to state clearly that it is an open door home, we can accompany and visit our family whenever it suits us, although we do try not to visit in untimely hours. Every day at lunchtime and / or dinner we can be with them, either in the dining room, in their rooms and even in reception, facing the beautiful view of the sea, and by the way, the food is delicious.
It has also been said that the couple were going to be thrown out of the home for non-payment… they had only been there two months, I do not think that was enough time for this to happen.
Why am I telling you all this? Well simply to show the good care and humanity shown at Orpea, the kitchen team, cleaners, geriatric nurses, medical team and management, have never ceased to listen, and care with immense affection, to any resident or his/her family, always with sincere empathy.
I strongly urge that anyone who speaks and writes without knowledge, should first inform themselves, or the can do unnecessary damage with unconfirmed news stories.
Both my family and I thank the whole team and we are confident that our mother’s quality of life is in the best hands. 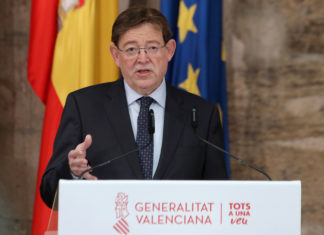 January 28, 2021
0
The merciless rise in active cases of Covid-19 in the Valencia region continues unabated. The number has increased by almost 18,000 in the last week...