Sir
We have read with absolute horror an article in your free newspaper The Post, (no 536), regarding a dog chained to a tree with food and water out of reach.
The dog was eventually rescued and taken to a vet, but still died of malnutrition and dehydration. What an appalling way to die.
Under Spanish law, mistreating or abandoning domestic animals is punishable by an up to 18-month prison sentence for first offences.
The owner was fined for cruelty, but three other dogs, (that he had also kept in appalling conditions), were returned to him.
What on earth was the court thinking when it decided to return the other three dogs? He should also have been banned from keeping dogs for life.
More needs to change in Spain. 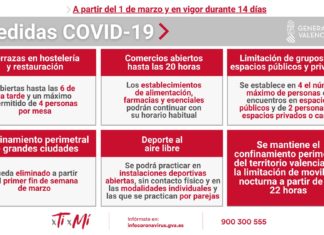 February 25, 2021
0
Valencia president Ximo Puig has just revealed how the economy will reopen next week. From Monday bars and restaurants will be able to open as...