Dear Sir/Madam
I recently bought an iPhone 7 as a Christmas present for my teenage daughter from Amazon.es. After a few days of delay the package finally turned up. I signed for it, opened it and found the phone had been removed from the box!
When I inspected the package I noticed a small cut in one of the flaps which easily slid open, so assumed that it had been opened by an Amazon employee pre-delivery and resealed after the phone had been removed.
I contacted Amazon and they told me not to worry, I would get a refund.
A week later Amazon contacted me to tell me that they had closed all my accounts and would not be refunding me after all. They refused to say why and now refuse to return my emails. I have been a customer for 15 years.
I went to the Guardia Civil and filed a complaint. They agreed the box had been opened by a Stanley knife, as often found in warehouses.
I went to the office of consumer protection and also contacted my bank for a refund, but so far no joy.
It basically boils down to my word against Amazon’s. As I did sign for the package, it looked fine to me and the postman.
I would urge all readers to inspect packages before signing for them as this episode has cost me €689 and a lot of heartache over Christmas. 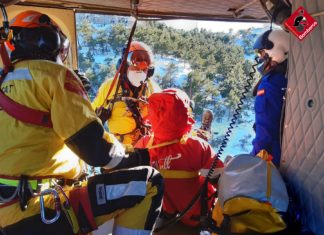 January 18, 2021
0
A walker had to be rescued by helicopter on Saturday after suffering a fall near one of the historic snow wells in Agres, to...