Home Costa Almeria News Why do the Spanish black up one of the Three Kings? 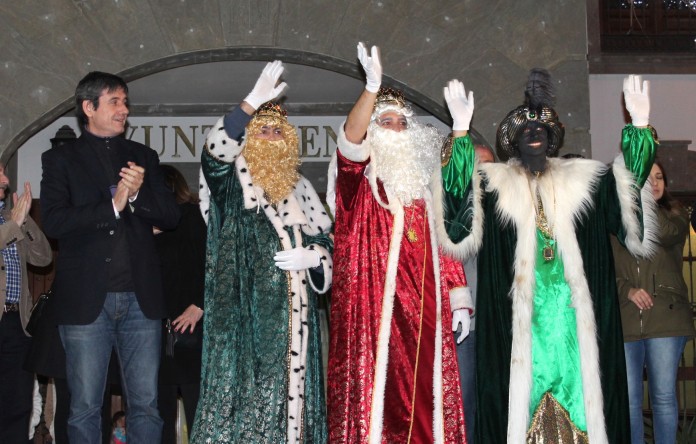 It’s the greatest family festival in the crowded calendar of Spain – Epiphany, when the three Kings are reputed to have reached the stable where the infant Christ lay, bearing gifts of myrrh, frankincense and gold.

Every town in Spain will have the famous cabalgata de reyes, the arrival of the three Kings on the night of January 5. The Kings will arrive and proceed through the town dispensing viciously hard little sweets, which when thrown with a good aim leave a nasty bruise.

The next morning, the Kings will dispense presents (supplied beforehand by doting parents) to children.

Every child knows and loves them: Melchor, Gaspar and Baltasar. Deprived of the fake beard affected by Santa Claus to protect his true identity, the three men of the town selected to act the parts have to resort to fancy hats and swirling coats, else risk eagle eyed children identifying their relatives.

But Baltasar has an ace up his sleeve – he’s the “rey negro”, the black King, and as such liberal amounts of boot polish turn a local Spaniard into an unrecognisable African King.

To the politically correct, this rather shocks the sensibility, especially if it’s a hot day and the boot polish starts to run. Even the (mainly northern) Spaniards are starting to question the tradition. So why does it continue?

The old Pope, Benedict XVI, waded into the argument a few years ago when he made the surprising yet obvious assertion that the wise men of the East were from the West, and suggested they may even have been from the pre-Christian Spanish kingdom of Tarshish.

In his book ‘The childhood of Jesus’ the Pope defends the tradition of the black king by pointing out that “this is a tradition of universality[…] they were Kings from all the continents, Africa, Asia and Europe. In the Kingdom of Christ there is no distinction of race or origin”.

Since time immemorial the tradition of the three wise men included Baltasar, the black King. What isn’t so clear cut is why a real black man isn’t usually put forward for the job.

Madrid this year invited ridicule by having an “ethnic” three kings’ parade. An ecumenical celebration that made no mention of Jesus, and with star billing, a “truly black Baltasar”, in the words of Mayor Carmena. This break with tradition hasn’t gone down well, mainly I suspect because of the lack of sweets.

The suburb of Rivas went further, and turned the Kings into Queens, having the “tres Reinas”. After the woman playing Queen Baltasar described herself as “only a Columbian mulatto”, El Mundo, amongst other national dailies, dedicated several opinion pieces to the question: “Was the Reina black enough?” The answer appeared to be: no.

But the use of “truly black” people in this traditional spot is still shocking enough in 2016 to be used as a political card to generate headlines.

The simple answer is that there is no general feeling amongst Spanish of the need to establish racial equality. All the ammunition of the Spanish politically correct class of intellectuals is directed towards gender equality, and equality amongst those of different skin colours appears to be a secondary objective.

Certainly there is no suggestion that black people are dissuaded from volunteering. Instead, it is simply that local people are put forwards for the honour, and, especially in the smaller villages of the south, it’s the respected traditional villagers who get picked.

The issue of racial equality is one that is on the agenda, but it’s never at the forefront of people’s minds.

In the recent national elections, there was only one black MP high enough on the lists to get on. Rita Bosaho was on the Podemos list for Alicante. Born in Spain to parents from Equatorial Guinea, she describes herself as “afroespañol”. But she appears almost a footnote in debates about electoral lists, as columnists write thousands of inches of column space on whether enough women were on the lists – or if actors will make good MP’s.

There simply isn’t the same immigrant rights lobby here as there was in the UK. There isn’t a collective force for change capable of making the question of equality the same burning issue it is in other countries. Mainly, I suggest, this is because immigration into Spain differs from the great UK waves of the 1960s. The South American diaspora fractures along national, not ethnic lines. And the northern African immigrants are here to work, not change Spanish society.

This is starting to change. Consuelo Cruz, a Columbian who heads up the national Afrosocialista grouping for the PSOE, urged councils to “end this discriminatory practice”. “Can you imagine the outcry if an African nation used a black Santa Claus painted white?” she asked rhetorically. Thanks in part to her efforts, the region of Navarre this year asked all councils to make a special effort to find local black volunteers to take the part of Baltasar, and the PSOE is debating whether to force all its councils to prevent “blacking up”.

Without pressure from hard working people such as Sra Cruz, Spaniards will still be “blacking up” on January 6 for generations to come. It’s a long road to travel – according to Ideal newspaper, a 2014 petition asking for a non-white Baltasar in Almería attracted just 53 signatures.