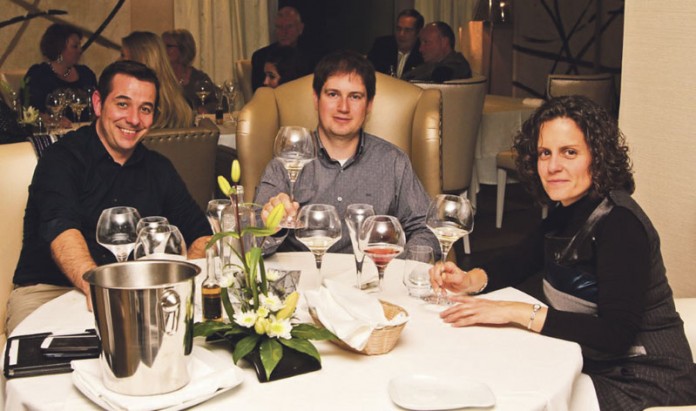 I recently returned to Restaurante Nox, on Javea’s Arenal front line, to present a wine pairing dinner. Little did clients know that the evening was going to be even more special with the appearance of Cesar, The Voice of Love, giving a super performance, and being joined at one stage by Soprano Soloist, Claire Harkness-Post.
And that wasn’t all – throughout the dinner patrons were treated to the chilled piano and dulcet voice of Ian Henry. All in all a super night!
As with the last wine/food pairing event, I’d been along to several ‘trial runs’ at Nox – we had ideas as to which wines were going to best accompany the splendid five-course dinner crafted by new Head Chef, Mark, but we had to put them to the test. Thus, a sumptuous lunch was served to the owners, the restaurant’s wine suppliers and myself, with each course paired with at least one wine. I tell you it’s a tough life, but I don’t complain!
And, as if this wasn’t hard enough – the first course, though very tasty and inventive, was a touch problematical re its wine partner. So, we had to try 5, before we got it right! I should point out here that we are talking ‘tasting’ not ‘drinking’ – I wouldn’t want you think I was advocating anything other than drinking in moderation!
The first dish was salmon edged with beetroot, a fascinating pairing in itself, and one that really worked well. There was a beetroot coulis smeared on the plate with a garnish that included pink grapefruit and orange – this dish looked as good as it tasted!