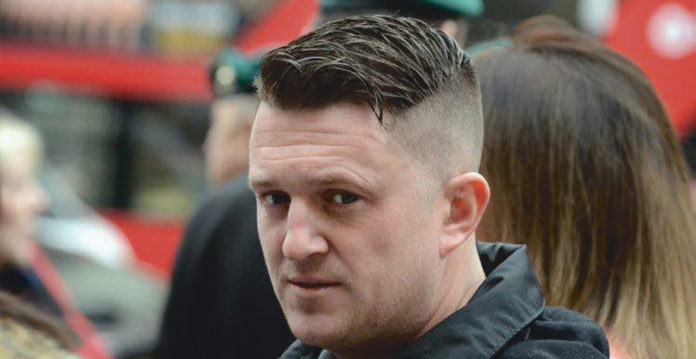 Now that convicted criminal Tommy Robinson has had his bail conditions removed, he is free to go off on his speaking tour of the US where according to reports he could earn up to £1million. There really are people mug enough to stump up cash to see this much-reviled hate figure spout his usual rubbish. It’s easy to see why.
In America as in the UK, there is a significant, mostly white portion of the population that feels marginalised and ignored by so-called liberal elites. Robinson has rushed in to fill this void not with hope, or sensible policies, but with hate. He offers very little in the way of ideas.
When his supporters turn up to rallies, the atmosphere is often repugnant and febrile. They don’t make many arguments either, just shout and grunt about an apparent erosion of the freedom of speech when basically they haven’t a clue what they’re on about. They are largely, but not wholly a poorly educated bunch and therefore it’s very easy for someone like Robinson to manipulate their thinking and emotions.
He’s borrowed a trick straight out of Enoch Powell’s playbook. And that is to pick isolated examples of crimes caused by a handful of immigrants and use them to demonise an entire race or religion. Conveniently neglecting the fact that infinitely more crimes are committed by British nationals.
As much as he talks nonsense he is a savvy operator, I’ll give him that. He wants you to believe that he is a fearless underdog fighting against a system that is intent on silencing him. But this is so far from the truth that it is ridiculous. He’s just a fascist and a chancer who’s spotted an opportunity to promote himself and say what some people want to hear.